Ryalex Security were commissioned in 2015 by G.J Roth Pty Ltd to design an electronic access control system for various bicycle parking facilities under Transport for NSW’s Bike and Ride Initiative. Access to the sheds would be via the Opal card, a contactless smart card ticketing system now used across greater Sydney for public transport. The facilities would need to be completely standalone, yet provide 24 hour access using the Opal card to unlock the door.

Finally, the components were selected to be vandal‐resistant and able to ensure the safety of users. To add to the sustainable nature of the project, Ryalex suggested the use of solar power as opposed to the extensive civil works required at some locations for 240v power which was well received by all parties involved. 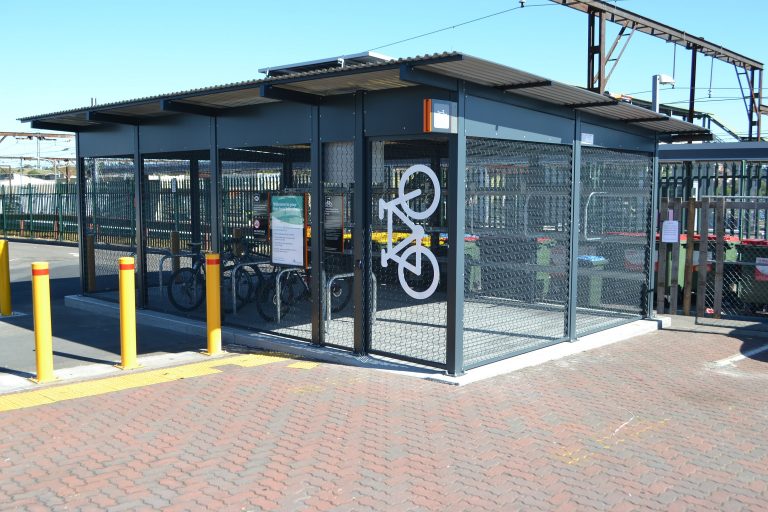 After the tender was won, there were over three months of meetings and discussions amongst all stakeholders, until a solution was agreed upon, during which time Ryalex worked to research and design the various aspects of the final system. Integriti by InnerRange was the hardware and software platform selected due to the scalability for future expansion of the project, IP based for remote monitoring and management, and additional software features like advanced reporting, dynamic user import and mobile app for system control after hours. All hardware selected was evaluated to ensure low power consumption and manufactured to industrial grade.

With electricity being essential for all devices to run, the solar system was specified to be able to supply power for several days with zero charge from the sun, and an early warning system was implemented to issue a warning notification should the battery ever approach a critically low level, so it can be replaced. A solar panel was selected with a sufficiently high power output to charge the modern lithium batteries quickly and efficiently. The Lithium Ion Phosphate batteries were selected over lead acid due to their longer life, higher output capacity, lighter weight and fast charging capabilities. The particular model chosen was used as they incorporated the use of cell monitoring modules which regulates the voltage from each individual cell resulting in longer battery life.

A hosted server running Integriti Professional was deployed in a secure datacentre as a headend to control, administer and monitor the bicycle sheds. The Datacentre ensures 99.9% uptime, redundancy and data backup facility. Data is exchanged via the access system’s controller securely over the 4G network. Ryalex created a custom firmware for the access card readers to extract the opal card data and integrate with Integriti.

Throughout the final design stage, Ryalex proposed to include and integrate the internal lighting for the bicycle sheds into the security system. LED strip lighting was selected in conjunction with a vandal resistant housing to ensure low power consumption and resiliency. The system is programmed to provide background lighting at night, increasing in brightness upon a valid card entry.

Since the first shed opened in 2016, a further 24 sheds have been built including implementation of the access control system. The Initiative has been warmly received by cycling enthusiasts and customer feedback has been positive following implementation.

If you would like more information about any of our products or services, please fill in the form.